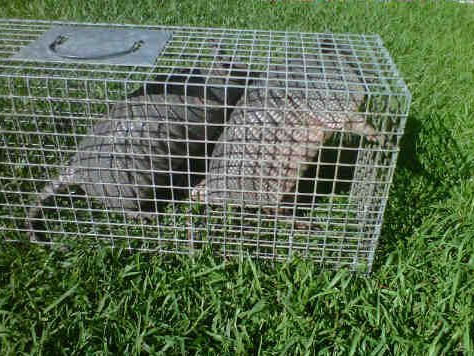 The nine banded armadillo is a prehistoric looking animal that belongs to the mammal family. Armadillos were introduced in 1920 in Florida. Their population has spread very quickly through many different states of the US. Armadillos, although a beneficial critter, can cause major damage due to their proficient digging in search of insects and grubs. They can ruin beautiful lawns and gardens in just a few days. They can also burrow at the base of your home or driveway which can lead to foundation cracking and busting pipes. These unwanted pests can create major damage for homeowners in just a short time.

Armadillos dig burrows in which they will sleep in up to 16 hours per day. They commonly forage for food during early morning and evening hours. They are in search of grubs, beetles, ants, termites, and other insects that live in the ground. They have very poor eyesight, and use their sense of smell to locate their food. Once these pests have located these insects they will use their strong legs and huge front claws for digging, along with their long, sticky tongues for extracting these ants and termites from their tunnels.

When looking for insects in the soil, armadillos dig numerous holes that can destroy lawns, flowerbeds, gardens, and golf courses. These holes typically are 1-5 inches deep and 1-5 inches wide. They can also uproot ornamental plants and flowers. Armadillos also dig many large burrows that are typically 7-9 inches in diameter and can go deep as 16 feet into the ground. These burrows are a potential hazard to foundations of homes and can also lead to pipes bursting. Armadillos can have several different burrows in one territory. Armadillo can burrow under driveways and patios which can cause structural damage.

Scientist have identified over 25 different parasites and disease agents on armadillos in North America. Rabies has never been diagnosed in armadillos, but they can carry bacterium Mycobacterium leprae which causes Leprosy. Leprosy in wild armadillos has been reported at rates ranging from 0.1% to 10% depending on the state.

The nine-banded armadillo, Dasypus novemcinctus, adults normally weigh from 8-17 pounds. This species occurs in Texas and east, throughout the South. Cold weather limits the northern boundary of the armadillo's range. Armadillos have a shield-like shell covered with horny scales. Joints in the shell are flexible, which enable the animal to bend and twist. Armadillos have poor eyesight and hearing, but a keen sense of smell. Both males and females are about the same size, look alike, and have similar habits. Despite their awkward appearance, armadillos are agile runners and good swimmers, and even have the ability to walk underwater across small streams. Armadillos breed in late July and have a 5-month gestation period. Only one litter is produced each year from a single egg which always includes four identical young of the same sex. The young look like the adults except that they are smaller and their armor coat remains fragile for some time, becoming harder with age.